OpEd: Jack
Eye roll this looks like a really bad photo/shop of a cross between the Sweden Gripen with the tail of the US F-16... Iran and Ammmaaadeedeejad' crack me up with all their rediculous posturing! albeit they are still a dangerous enemy of the world and religion outside of radical Islam under Sharia Law! Masters of IED and suicide bombers!
Picture of the Gripen to compare:

LOL... I would venture to say Irans  real home built AC looks more like this> 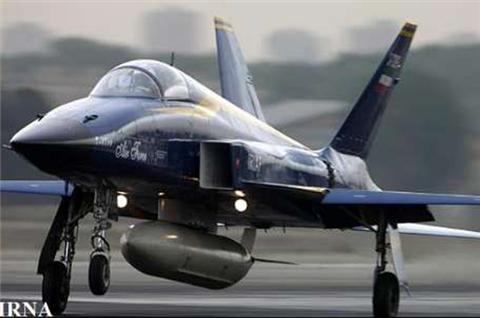 TEHRAN, Iran (AP) — Iran on Saturday unveiled its newest combat jet, a domestically manufactured fighter-bomber that military officials claim can evade radar.
President Mahmoud Ahmadinejad said in a ceremony broadcast on state TV that building the Qaher F-313, or Dominant F-313, shows Iran's will to "conquer scientific peaks."
The Qaher is one of several aircraft designs the Iranian military has rolled out since 2007. Tehran has repeatedly claimed to have developed advanced military technologies in recent years, but its claims cannot be independently verified because the country does not release technical details of its arsenals.
The Islamic republic launched a self-sufficient military program in the 1980s to compensate for a Western weapons embargo that banned export of military technology and equipment to Iran. Since 1992, Iran has produced its own tanks, armored personnel carriers, missiles, torpedoes, drones and fighter planes.
"Qaher is a fully indigenous aircraft designed and built by our aerospace experts. This is a radar-evading plane that can fly at low altitude, carry weapons, engage enemy aircrafts and land at short airstrips," Defense Minister Ahmad Vahidi said.
Vahidi said advanced materials were used to manufacture the body of the aircraft, making it Iran's best stealth plane.
However, some reports suggest that Iran's program relies on equipment supplied by major international defense contractors and that it incorporates parts made abroad or uses outside engineered technologies in its domestic designs.

However, some reports suggest that Iran's program relies on equipment supplied by major international defense contractors and that it incorporates parts made abroad or uses outside engineered technologies in its domestic designs.
Still photos of the Qaher released by the official IRNA news agency and pictures on state TV showed a single-seat jet. They described it as a fighter-bomber that can combat other aircraft and ground targets.
Iran's English-language state Press TV said Qaher was similar to the American-made F/A-18, an advanced fighter capable of dogfighting as well as penetrating enemy air defenses to strike ground targets.
But Hasan Parvaneh, an official in charge of the project, said the physical design of the Iranian plane was unique and bore no resemblance to any foreign fighter jet.
"Development depends on our will. If we don't have a will, no one can take us there," Ahmadinejad told the inauguration ceremony in Tehran. "Once we imported cars and assembled them here. Now, we are at a point where we can design, build and get planes in the air."
Ahmadinejad said Qaher was built for deterrence.
"It's not for expansionism. It's for deterrence," he said, claiming the aircraft was among the most advanced fighter jets in the world.
In 2007, Iran unveiled what it said was its first domestically manufactured fighter jet, called Azarakhsh or Lightning. In the same year, it claimed that Azarakhsh had reached industrial production stage.

Saeqeh, or Thunder, was a follow-up aircraft derived from Azarakhsh. Iran unveiled its first squadron of Saeqeh fighter bombers in an air show in September 2010.
Posted by Jack at 11:41 AM