oped: Yes indeed...it all goes back to the Kaepernick Syndrome     UNR is suffering from the same...they are on a losing streak... not to forget that UNR is where Colin got his start  and was drafted into the NFL from ...imho I do believe this is nothing more than reverse discrimination (Racism)...and the entire BLM  offensive line on the Raiders Team as well as UNR should be terminated for cause!
http://sharlaslabyrinth.blogspot.com/2017/09/unr-wolfpack-football-2017-season.html


Hold on to your boots, ’cause we’ve got some convincing numbers to go along with this brand new theory.

We already know that the NFL is in deep water with the Take A Knee problem, where players are sitting out the national anthem, or linking arms, or whatever new gesture they’ll invent by the time next Sunday hits.
During a game last week between the Raiders and the Washington Redskins, the offensive Raiders sat out during the national anthem with a few exceptions.
Specifically, Quarterback Derek Carr stood for the anthem. Most of the players on the Raiders are black, but Carr is white.
So the radio show Armstrong & Getty, which is a morning drive show whose announcers used to present at Tea Party rallies, started talking about the stats involved with the Raiders. A “sack” happens when a quarterback is tackled behind the scrimmage line before he can throw a forward pass. Last season, Carr wasn’t sacked even a single time. But on the radio show, one of the hosts explained:

“So Derek Carr, who is never sacked, was sacked four times by the Redskins, back to back on the second offensive series of the Raiders.”
He went on to say that that first series that Carr threw was intercepted “almost immediately,” and the center, who snaps the ball back to the quarterback, snapped it to Carr “three times” before Carr was ready. The ball was hiked back to Carr knee’s before it made sense in the game.


This is either some high school level of play, or deliberate sabotage.

That’s what Armstrong & Getty seem to be pointing out.


“If the story is true, you’ve got an animosity between a white quarterback and a black offensive line that you can’t fix very easily.”

They then went on to discuss whether this alleged throwing of the game would be a one-shot deal, or if it will keep happening until Carr sits on the bench, too. “Are the black guys in the team not going to block for the white guys?”
They also said that there were some dropped passes that were “really weird,” saying that while this can certainly happen in the NFL, the “other stuff” that’s going on is making them conspiratorial. The hosts cited an “inside source” that confirmed to them that the game was thrown. If this is true, then the NFL has a massive problem to deal with that goes way beyond the national anthem.
When

they had Bill O’Reilly on later in the show, his contribution is that throwing games is illegal and that players might end up in prison.
Last month, Raiders legend  Tim Brown got after current Raider Marshawn Lynch for sitting down during the anthem, saying “Why bring this negativity to this incredibly positive situation? …I don’t understand these guys, man, they try to make statements… football is where people go to get away from all that stuff.”

Head of National Guard: ‘I Haven’t Seen Any Delay in Federal Help for Puerto Rico’


Puerto Rico took a brutal hit from Hurricane Irma and then Hurricane Maria. While there have been claims from officials that the U.S. territory was not getting the help they needed, the head of the National Guard said on Tuesday that he has not seen a delay in the relief.


"Gen. Joseph Lengyel said he has not seen any political posturing that would deny or slow aid to the U.S. territory, which has been hit by two powerful Category 5 storms in the past month that killed at least 16 people and knocked out power on the entire island.
Puerto Rico’s nearly 3.5 million residents are now living without electricity, and Lengyel expects it will be “more than a month” until electricity is fully restored."


Lengyel said, “We want to make sure they have everything they need. We’re very in touch with the folks in Puerto Rico.”
He went to the island on Monday to assess the damage and meet with Puerto Rico government officials.
He added, “The National Guard Puerto Rico, we have the capacity to send them if they need them.”
So why exactly are there numerous lawmakers making it sound like the relief is dragging their feet and not working hard and fast enough?

“The Trump administration’s response to the destruction in Puerto Rico has been wholly inadequate,” House Armed Services Committee ranking member Adam Smith (D-Wash.) said in a statement Monday.
“A territory of 3.5 million American citizens is almost completely without power, water, food, and telephone service, and we have a handful of helicopters involved in [Defense Department’s] response,” he said. “It’s a disgrace. At a minimum, President Trump needs to assemble a coordinated military effort headed by a three-star general officer, as President Bush did after Hurricane Katrina.”

This coach proves you should NEVER kneel for the anthem 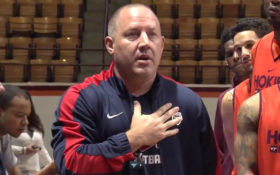 After hundreds of multimillionaire NFL players turned Sunday football games into a political sideshow,  one coach decided to take matters into his own hands.
Although it’s two years old, the video has exploded on social media in response to the recent national anthem controversy — and for good reason.

It’s what every American that wants to disrespect the flag needs to see.
The video shows Virginia Tech basketball coach Brent “Buzz” Williams introducing his team to a group of veterans.
He discusses the meaning of the national anthem and the importance of honoring our nation’s veterans and the sacrifices given to defend American freedom.

It’s clear the moving speech on American patriotism clicks for his team; they end up singing along with the veterans while they honor the flag together.
Amen.

Watch the powerful footage below —

Source: https://thehornnews.com
Posted by Jack at 2:11 PM No comments:

Cowboys' Jerry Jones: Anthem 'Not the Place' to Stage Protest

Count billionaire Jerry Jones, owner of the Dallas Cowboys – which had once become affectionately known as "America's Team" – on the side of President Donald Trump as he has denounced NFL players' protests of the U.S. flag and National Anthem.
"I do not think the place to express yourself in society is as we recognize the American flag and all the people that have made this great country – the very opportunity for us to be there in front of the nation," Jones told  Fox Business' "Mornings With Maria."

"So that's not the place to do anything but honor the flag and everybody that's given up a little for it."
As protests were staged throughout the NFL Sunday, including a Pittsburgh Steelers "unification meeting" in the locker room during the National Anthem at Chicago's Soldier's Field, a U.S. Army Ranger veteran on the Steelers refused to participate in his team's protest.
Steelers offensive tackle Alejandro Villanueva, who served in Afghanistan, stood outside the stadium tunnel from the locker room, stood during the National Anthem with the traditional right hand over the heart.

President Trump tweeted his support of "solidarity" in players locking arms during the anthem, but rebuked kneeling as "not acceptable."

Donald J. Trump ✔ @realDonaldTrump
Great solidarity for our National Anthem and for our Country. Standing with locked arms is good, kneeling is not acceptable. Bad ratings!

Source: http://www.newsmax.com
Posted by Jack at 5:31 AM No comments: