DNC Convention to be Protected by Two Things They Hate: Guns and… 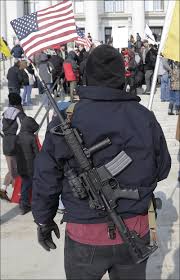 By Philip Hodges
The Democratic National Convention will be held next month in Philadelphia at the Wells Fargo Center. As with every other large political event, it will have heavy security to maintain an exclusive participation. One such security measure will be a “no-scale fence,” not unlike a country’s border wall intended to keep illegal aliens out.
NBC Philadelphia reported about the border wall going up around the DNC Convention venue:


Security at the Sports Complex during the Democratic National Convention next month will include “no-scale fencing” to enclose the Wells Fargo Center and Xfinity Live!, the Secret Service special agent in charge said in an interview Thursday.

[Read Related Article: Dem Rep Blasts Trump: “Shove Border Wall Up Your…”]
Besides the border wall that they will be erecting to keep protesters and others out, there will also be heavily armed security guards – armed with guns, something else that Democrats claim to hate.
Back in April, the gun rights group Citizens Committee for the Right to Keep and Bear Arms (CCRKBA) petitioned the DNC to forego the use of firearms at their convention:

“Democrats have become known as the party of gun control,” said CCRKBA Chairman Alan Gottlieb. “Virtually all recent gun control proposals at the federal and state levels have been launched and championed by Democrats. It’s time for the party to ‘put up or shut up’ about guns. The best way to do that is to forsake armed security during the convention.”
He noted the “overwhelming hypocrisy” of privileged liberal elitists who have traditionally opposed expanded concealed carry rights for average citizens while they continue to enjoy the protection of armed security. Front runner Hillary Clinton has stated that the Supreme Court was “wrong” in its 2008 Heller ruling about the Second Amendment. She has pushed gun control for average citizens, yet she enjoys Secret Service protection.


“If a political party believes that guns do not make us safer,” Gottlieb observed, “they should set an example by rejecting any and all forms of armed security at their national convention. A party that does not believe in the right of individual citizens to keep and bear arms should not benefit from the safety provided by others who bear arms.”


In addition to the border wall and heavily-armed security, if this year’s DNC convention is anything like the one four years ago, IDs will have to be shown in order for DNC officials to grant media their press credentials. Democrats have consistently voiced opposition to voter ID laws, which they routinely call “racist.”
The border wall – such as the one that Trump has campaigned on building – voter ID laws, and a plethora of guns are all things that Democrats claim to be opposed to. Yet, when security is actually what they want, they know those things are important in reality.
Posted by Jack at 5:24 PM No comments:

You know that you are living in a wicked culture when we begin to split hairs on such things as having sex with an animal. It should be very clear what is and what is not sex. We are not in grade school; it should not be hard to define. But alas, in Canada they are struggling with the definition.
Breitbart reports


Canada’s highest court has just ruled that some sex acts between humans and animals are legal.
In a quixotic ruling, the country’s high court ruled that a man who was on trial for raping and sexually exploiting his own daughters wasn’t guilty of “bestiality.” The man reportedly, “smeared peanut butter on the genitals of his victims and had the family dog lick it off while he videotaped the act.”


So, then, oral sex between people and their pets is not sex? This vile man should not have been alive to contest this in the first place. We have left the Law of God and this is the result.  But, that aside, how can you come to this conclusion?


As a result of the rape case, the court ruled 7 to 1 that humans having sexual contact with animals is OK if there is no “penetration” involved in the act.
In its ruling, the court decided that the legislature had not clearly defined the terms in the country’s bestiality laws and the way the statute is written should be read to only outlaw animal penetration, whether that penetration is animal to human or vice versa.


So then, if you live in Canada you are free to gain sexual pleasure from your dog or cat as long as there is no penetration involved. This is madness. And it will not be long before the pedophile will attempt the same logic with their perversions.
Posted by Jack at 4:28 PM No comments:

oped: No way Jose....he is a lousy congressman just a clone of John 'Boner' Boehner and part of the problem in congress...talk about a RINO Paul takes the blue ribbon for being the ultimate definition of one.
I would like to see him voted out of congress this election cycle...hoping Wisconsin voters wake up to who and what he is! Self serving and could give a hoot less about the welfare of the electorate!


An unnamed longtime GOP donor told the Daily Caller that while Paul Ryan made it clear in an op-ed that he would be voting for Trump this November, the Speaker actually wants Trump to lose to Hillary Clinton, in order to make it easier for Ryan to run for president four years from now.

Not surprisingly, Paul Ryan’s office flatly denied that the Speaker had any secret desires for Trump to fail in the general election. One of Ryan’s aides told the Daily Caller, “Speaker Ryan said in an op-ed in the Janesville Gazette last week that he is voting for Donald Trump and of course he wants the Republican nominee to win in November.”
[Read Related Article: Paul Ryan Just Issued This Statement on Donald Trump]
It wouldn’t at all be surprising to find out that Paul Ryan has ulterior motives in everything he does. He seemed to be deviously campaigning for president in the weeks and months prior to Donald Trump clinching the nomination. Then, once it was clear that Trump had garnered the required number of delegates, Paul Ryan wrote his carefully crafted endorsement in the Janesville Gazette.

But just days after that, Ryan was quick to denounce the presumptive nominee for his remarks regarding Judge Curiel. Trump came under fire from the press and other critics, including several in the GOP. Paul Ryan offered the most scathing critique, stating that Trump’s remark was the “textbook definition of a racist comment.” 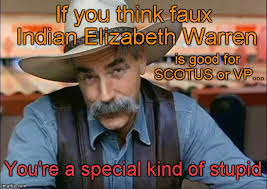 
I don’t believe for one second Sen. Elizabeth Warren will be presumptive Democratic nominee Hillary Clinton’s running mate. I think that will go to one of the Castro brothers from Texas. One of the knocks against Warren is how she claimed she was Native American, which gave her perks when she applied to college. Some see this as fraud but for some reason, nobody has done anything about it.
Warren has inserted herself into the Election season calling out Donald Trump every time she gets a chance via social media. Well, the members of the Cherokee Nation created a video to call out Warren over her lies, and it’s very powerful.
Hopefully, you will share this after watching, and this needs to go viral. If Warren wants to jump in the race, everything is up for grabs, agreed?