Have a very Passionate Easter week-end

Just remember Jesus died for our sins and gave us our God Given not man given rights...our Constitution/Bill of Rights enforces these God given rights:


The Passion of the Christ: Resurrection (Mel Gibson) is in development starring Jim Caviezel. Tells the story of the resurrection of Jesus.

Why It Shouldn’t Matter If We Repeal The Second Amendment In a properly functioning America like the Founders envisioned, a repeal of the Second Amendment would be virtually meaningless.

by: Benjamin R. Dierker
There is no legal right to own a firearm in the United States. The Constitution does not give citizens the right to own weapons, and no legal or historical arguments support the idea that it does. Instead, a much deeper and more important philosophy provides for gun ownership: natural rights. These rights are not given, but protected. Not to expand citizens’ rights, but to limit government’s power.
Gun ownership is so integral to the United States’ DNA because armed Americans overthrew the world’s most powerful military empire using guns. The freest, most prosperous nation in human history, and a good deal of prosperity around the globe, owes its origin to guns. But the issue is far deeper than guns; it is about rights.

In a properly functioning America like the Founders envisioned, a repeal of the Second Amendment would be virtually meaningless. The right existed already; the Constitution merely secures it. Unfortunately, our society has loosened its grasp on natural rights philosophy and devolved into dependency on government-sanctioned rules. Today, however, even unambiguous text is under scrutiny by Democrats as prominent as former Supreme Court Justice John Paul Stevens.

The Distinction Between Natural and Legal Rights

The right to keep and bear arms is a natural right. It can be derived and is protected in multiple ways. Inherently, humans have natural grounds for self-preservation and defense. This right is beyond the reach of any person or government. Individuals can protect themselves using any necessary tools or actions.
Individuals also have a natural right to own property. Far be it for the federal government to regulate the personal items a free citizen enjoys in her home. To regulate personal property in private use on the grounds of its danger would be to inspect every knife, lighter, hammer, gardening tool, and gas-powered stove.

Owning a gun is well within the canon of natural rights that any free people should enjoy. Natural rights are so critical because they are innate in us. If the government dissolved or a new one took its place, it should have no effect on the basic entitlements of man to life, liberty, and the pursuit of his own happiness. The righteous task of the founding, therefore, was to craft a government impotent to crush these rights.

Many state constitutions included a list of natural rights, not to provide for these rights, but to promise the people that the government would not tread on them. The federal Bill of Rights comes as a series of amendments, not because they were afterthoughts, but because the U.S. Constitution was written to limit the power of the federal government such that it would be powerless to act where it was not authorized.

Debate persisted for years over whether the people’s natural rights should be enumerated at all. Some argued natural rights were so obvious that an enumeration was unnecessary, not to mention the government’s limited reach and small scope at the time. In a 1787 letter to James Madison, Thomas Jefferson wrote, “a bill of rights is what the people are entitled to against every government on earth, general or particular, and what no government should refuse, or rest on inference.”
Jefferson and others believed that leaving natural rights to “inference” put far too much trust in government and future generations in power. Still others believed that enumerating certain rights would create a presumption against other rights. If the government only mentioned a few natural rights, the government could encroach on every other right a free citizen ought to enjoy, citing no bar against its encroachment.

That’s Why We Have the Ninth Amendment

The solution was the Ninth Amendment, which preserves “other rights retained by the people.” Combined with the rest of the Bill of Rights, the federal government is clearly prohibited from trampling on free citizens’ natural or legal rights. According to the Ninth Amendment, a free citizen retains the right to self-protection and property, among a vast reservoir of other rights, and the government cannot interfere.
At its most basic level, a gun is a tool and item of personal property, which any person has a natural right to acquire independent of, and especially in spite of, government. A repeal of the Second Amendment should not truly harm gun ownership. Nevertheless, there is a reason it was explicitly included in the Bill of Rights, and listed so prominently. The reason is that human nature cannot be trusted, and both time and power destroy the protections created for free people.

Today, it is all too clear that if the Second Amendment were not so explicit, the tyranny of the majority would have suppressed the right long ago. The government did not create the right to own a gun, it secured that right, and thank God the Founding Fathers had the foresight to unambiguously prohibit the government from infringing on that right.
The calls to repeal the Second Amendment are voiced by radicals. Despite their high level of education, these radicals have not internalized the philosophy of natural rights or the significance of the Ninth Amendment. Yet the people retain their God-given rights, no matter how tyrannical protestors become.

The American revolution began when.... 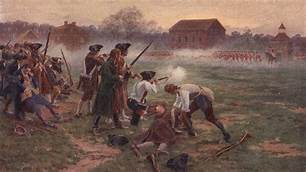 ...The British marched from Boston to Lexington to seize colonial weapons

There were shots fired by British soldiers in Boston after colonists started throwing snowballs at them. However, it was Lexington and Concord where the first actual skirmish occurred. The British marched from Boston to Lexington to seize colonial weapons and that is when "the shot heard 'round the world" occurred. A random shot was fired from inside the armory at Lexington, which is believed to be a misfire. The shot was not actually aimed at the British. However, the British did believe they were taking fire and began to return fire. This is the first battle of the war.

For all the numbskulls (Progressives) who are ranting and raving about repealing the 2nd Amendment...be advised be very careful about what you ask for...the British lost their colonies over this very issue along with over taxation.
You just may get a 2nd Revolution if you persist in violating our US Constitution/Bill of Rights.
Your Progressive movement is coming to a end...get over it or pay the price for your treasonous actions under 18 USC 2384/85

I say anyone who wants to repeal the 2nd Amendment is a communist and should be banned and deported to Russia, China, Cuba or North Korea after being prosecuted under 18 USC 2384/85 and after serving their time in the  Fed Pen...

See: http://sharlaslabyrinth.blogspot.com/2013/02/barry-barack-obama-is-new-anthony.html
Posted by Jack at 11:56 AM No comments:

You must watch the video the gun control lobby fears.

And you need to watch it before the gun grabbers try to ban it from the Internet.

Over 30 million patriots have watched Virginia House of Delegates member, Nick Freitas, drop a truth bomb -- exposing the gun control lobby and their radical agenda -- from the floor in Virginia's General Assembly.

Go here to donate and support Nick Freitas : https://nickfreitasforsenate.com/2nd-vid.aspx?pid=sb08a
Posted by Jack at 8:48 PM No comments: