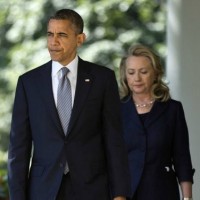 Jeff Sessions has big plans for these Obama pals
After eight years of scandal and lawlessness, it looks like the beginning of the end may finally be coming for former President Barack Obama’s cronies.
Appearing on Hugh Hewitt’s radio show Thursday, Attorney General Jeff Sessions told the conservative talk show host that a special prosecutor may be appropriate — and soon be needed — to investigate Obama-loyalists Eric Holder and Loretta Lynch.
Sessions was asked about the IRS targeting scandal, the “Fast and Furious” case, former Secretary of State Hillary Clinton’s email servers, and other Obama-era scandals that were swept under the rug by the former administration, and Hewitt suggested some kind of outside counsel could be appropriate because they’d have the “authority to bring charges if underlying crimes were uncovered.”
Sessions seemed open to the idea, promising he was “going to do everything I possibly can to restore the independence and professionalism of the Department of Justice.”

“So we would have to consider whether or not some outside special counsel is needed,” Sessions said. “Generally, a good review of that internally is the first step before any such decision is made.”
There remains lingering anger among American voters, who have expressed outrage over the Obama administration’s decision to not file charges in either the Clinton email investigation nor the probe into how the IRS processed requests for tax-exempt applications.

Sessions went on to say the outcome of the IRS case remained “of real concern” after the entity was accused of unfairly targeting conservative groups.
During the campaign, President Donald Trump said he would appoint a special prosecutor to look into Clinton, though he has since failed to follow up on the promise.
— The Horn editorial team
Posted by Jack at 2:10 PM