Who is Michael LaVaughn Robinson? 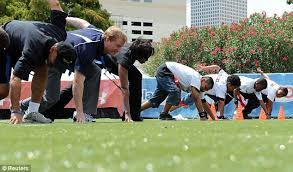 Dunno y'all be the judge : Old saying a picture is worth 1000 words!


Old story revisited since Michelle loves to be a surrogate for Barry and now Hillary tearing into Donald Trump...fair is fair!

About two months ago, my office was contacted by an anonymous source who claimed to be a former White House staff member of the Obama administration. He claimed to have sensitive information regarding a stunning revelation about the First Lady, Michelle Obama and he wanted to arrange a meeting with me in person to present the evidence for this claim. Like any good, Christian journalist, I was skeptical at first. Why would you contact me? Are there not dozens of major news outlets you would want to appeal to first? Of course the answers to those questions are very simple.
Unlike the days when the media used to do their jobs, like during the Watergate scandal, we are now living in a time when the liberal media simply cannot be trusted. I met with him for the first time yesterday evening and he confirmed these suspicions.

“I just can’t go to the major alphabet networks. They are in the tank for Obama and it is network policy to cover up any critical stories regarding the President and his family. The White House has officially created a State media,”